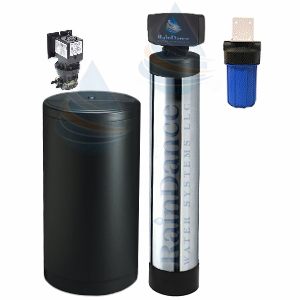 Ferrous - This type of iron is often called "clear water iron" since it is not visible in poured water. It is found in water which contains no oxygen, such as water from deep wells or groundwater.

Ferric - Ferric iron is also known as "red water iron". This type of iron is basically ferrous iron which has been exposed to oxygen (oxidized), usually from the air. These oxidized particles are generally visible in poured water.

Iron Bacteria - Iron Bacteria is generally more common than sulfur bacteria, simply because iron is abundant in ground water. Iron bacteria are "oxidizing agents." That is, they combine iron or manganese dissolved in ground water with oxygen. A side effect of the process is a foul smelling brown slime which can coat well screens, pipes, and plumbing fixtures. This slime isn't a health hazard, but it can cause unpleasant odors, corrode plumbing equipment, and clog well screens and pipes. If conditions are right, the bacteria can grow at amazing rates and an entire well system may be rendered virtually useless in just a few months.

There are several signs that may indicate an iron bacteria problem. Water may have a yellow, red or orange color. Rusty 'rainbow' slime deposits may form in toilet tanks. A strange smell resembling fuel oil, cucumbers, or sewage may be noticeable. Sometimes the odor will only be apparent in the morning or after other extended periods of non-use. Iron bacteria can be readily identified by the red, feathery floc which forms overnight at the bottom of a sample bottle containing iron and iron bacteria. In some places, it causes great damage; in others, it is considered a minor nuisance.

Bacterial contamination of a water supply doesn't always mean 'health hazard'. Some types of bacterial contamination are more annoying than harmful. Iron and sulfur bacteria are two of the most common bacterial contaminants that well owners face. Neither type of bacteria is particularly harmful, at least not at the levels usually seen in well systems. However, they can be incredible nuisances.  Sulfur Bacteria - There are two categories of sulfur bacteria: sulfur oxidizers and sulfur reducers. Sulfur-oxidizing bacteria produce effects similar to those of iron bacteria. They convert sulfide into sulfate, producing a dark slime that can clog plumbing. Sulfur-reducing bacteria (SRB) live in oxygen-deficient environments. They break down sulfur compounds, producing hydrogen sulfide gas in the process. Hydrogen sulfide gas is foul-smelling and highly corrosive.

Colloidal iron - Colloidal iron consists of iron particles which are very small (typically less than 0.1 micron), so they cannot be removed by traditional filters. It is removed with oxidization followed by filtration and lastly small micron post filtration - contact us if you have colloidal iron.

Tannins - The Iron Max Plus also removes tannins! When Tannins are present, they will cause a yellow to dark tea color in water and an unpleasant taste and odor. This effect is caused by humic and fulvic organic acids formed during the decomposition of vegetation.

NOT ALL IRON BACTERIA FILTERS ARE CREATED EQUAL! We invite you to compare our quality, knowledge, and support with any others on the market today. We receive many phone calls from customers who have purchased inexpensive IRON BACTERIA REMOVAL systems from other companies and now regret it. Many of our competitor's systems are generic, massed produced and show up right off the shelf. Unfortunately, these systems have very low filtering parameters and can rarely be customized to treat water outside their listed parameters.

Lets gets started with our selection of best-selling iron bacteria removal systems:


The Twin Alternating Iron Max Plus system is designed to provide a continuous, unlimited supply of filtered water with dual alternating filter tanks that stagger backwashing cycles so one tank is always ready to filter water no matter when you need it!

The Iron Max Plus Inline Package is specially designed for well water users that have a shared well or are unable to use an electric chlorination pump and want the hassle-free installation of an inline system!


The Iron Max Plus-FX series uses the same high performance filtration as our Iron Max Plus package treating iron bacteria, sulfur reducing bacteria, up to 30ppm ferrous & ferric iron, up to 5ppm manganese, up to 3ppm hydrogen sulfide gas odors, sediment down to 3-5 microns, and can also reduce the effects of hard water scale with the built-in salt-free hard water module! 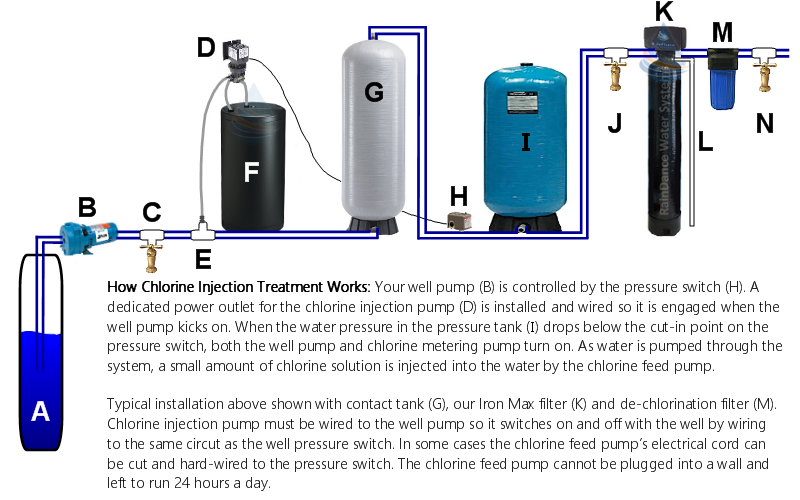 Are you concerned about the chlorine used in our Iron Max Plus series? Chlorination is the most effective way to treat iron bacteria problems and we want our customers to see the results. To assure our customers the utmost water quality all of our Iron Max Plus systems include an important post carbon filter to remove any residual chlorine and chlorine by-products from the water so you never realize it was added - as a bonus our post carbon system also filters volatile organic chemicals, cysts, and lead!

Compare The Benefits & Advantages Of The RainDance Iron Max Plus Series:

Filter Tank & Control Valve made in the USA & assembled in the USA!